As March came to an end, firefighters put out a brush fire near a Globe mobile home park and law enforcement searched for the man suspected of starting that fire and others.

On Tuesday afternoon, March 30, the Arizona Department of Public Safety received a report that a man was lighting fires along US Highway 70 near State Route 77. Flames then spread from there to the brush in a small canyon just east of the Alhambra Mobile Home Park, but did not reach the park itself. Globe Fire Chief Gary Robinson said the canyon fire burned just under an acre before it was contained.

The man fled from responding DPS officers and a search of the area was launched, assisted by the Gila County Sheriff’s Office and Globe Police Department. A helicopter was also called in by DPS and performed “a couple of” aerial sweeps, according to the Sheriff’s Office. However, the suspect was able to elude the search and still remained at large.

The suspect was described as 25 to 35 years old, approximately 5 feet 7 inches tall and weighing 145 pounds, with a buzz haircut. He was shirtless, wearing black pants and black shoes. He faces federal arson charges, since the fires were started on federal land, as well as state charges for trespassing and flight from law enforcement. 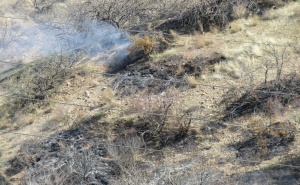 A Globe man was recently arrested and charged with attempted murder