By: David Sowders - Updated: 1 week ago

“This is about having a conversation on education,” O’Halleran said. “Education has changed; we have to address that as soon as we can, and part of it is broadband. I’m on the Energy and Commerce Committee, which addresses broadband and communication issues in the United States. Early on, even before the pandemic, we have recognized that this has been a continuing problem.

“Nobody woke up a year ago and said, ‘We need more broadband in America.’ We needed it 10 years ago, 20 years ago, we needed it when it started to be developed.”

O’Halleran noted there had been a national campaign to ensure that everyone in the country, whether in urban or rural areas, had a telephone. Today, a project is in the works to bring broadband to students in seven rural Arizona school districts – including Miami and Pima.

“We’re in a position right now to really step forward in a very exciting way,” said Rickert, who chairs the Final Mile Project. “Over the last five to 10 years we have taken tremendous strides in Arizona to bring high-speed internet to schools, hospitals, libraries and colleges throughout the state - but there’s a gap. We know 10 to 20 percent of our students don’t have access to the internet at home, and that’s where they spend most of their time. The pandemic meant they spent all of their time there, and we were trying to educate them in that environment.

“The Final Mile Project is aiming to close that gap, using a number of new technologies.”

Those technologies, Rickert explained, include CBRS (Citizens Broadband Radio Service), in which a tower-based transmitter can send a signal to any receiver within seven miles. “That receiver takes the signal, converts it into a wi-fi signal like you would get at a library or McDonald’s, but now you’re getting that at home. One of the big advantages is that the signal, because it’s coming through a school, is an educational subscription and is filtered. This way we make sure kids can access the technology but it’s protected.”

When schools were shuttered last spring by Covid-19, Lineberry sent a survey to parents asking whether they had internet access at home. “About 80 percent said they did. It was a month later that we discovered half of them meant they had internet on their phones. So mom goes to work and takes her phone with her, and the kids are sitting at home without internet access. The remaining half, who actually had what we think of as land-based access, have incredible choke points – maybe a 20M total download for the month – so that there’s no effective access.” 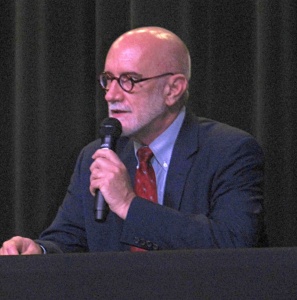 Lineberry said the Final Mile Project is aiming to raise money upfront and pay the cost of providing access lines, so that internet service providers only have to cover the costs of the access itself. One project under consideration is installing what he calls “essentially a really big modem” at the Christina Apartments in Miami, which would provide internet access within a 400-yard radius. “Families who subscribe for $10-20 a month will have a password to access the internet along with a protected process. The kids can get to everything they need, and parents can get to things like teledoc and job or government applications, but not things we don’t want the kids seeing,” said Lineberry.

“We’re taking the infrastructure aspect out of their [internet service providers] billing structure, and what’s left is $10-20 a month they can charge for that educational subscription to the internet,” said Rickert. “We’re doing this with a $1.5 million grant we received from the Arizona Department of Education as an allocation of their CARES Act money. That’s giving us the seed money to prove this works, and we’re really excited that Miami has agreed to participate.”

Lineberry said a vendor is currently laying out an engineering design for the Christina Apartments project, and money was in hand – part of a grant from Arizona Superintendent of Public Instruction Kathy Hoffman. “We’re hoping to implement it this fall, maybe have it in place by the end of the calendar year or next spring,” he added.

The seven school districts identified by the Final Mile Project are Miami, Pima, Holbrook, Hackberry, Beaver Creek, Chevelon Butte and Paloma. “The solution that works for one of our districts won’t be the same solution that works for another one – some are in the desert and some are in the pines - but we’re looking to find those different solutions,” said Rickert. “Once we can put those solutions in place, then we can scale it out to Young, Payson and rural districts throughout the state. We’re mapping the problem, and then we’re going to put a request for proposals out to vendors.”

The town hall also touched on another key issue in education; teacher salaries.

“The process of retaining teachers is so difficult in Arizona, versus the pay scale in Colorado, Texas and many other states. I saw too many teachers leave good schools because of that,” said O’Halleran. “We were heading in the right direction back in 2008. We were putting more money into the system, but then all of a sudden comes the Great Recession. Our K-12 schools were cut by $1 billion, and our universities and community colleges were cut by $600 million, I believe the number was. We’re still behind the curve on paying our teachers.”

“I think school funding is about a third of what it ought to be,” said Lineberry. “If we paid our starting teachers $60,000; if after 10 years they made $80,000; and if after 20 years and a master’s degree they made $100,000, we’d have incredible teachers. We would reward the great teachers we have appropriately, and we’d be able to replace the ones who aren’t great teachers. My guess is that all that extra money could come out of things like the prison budget or the safety net budget down the road.”

Lessard appointed to Chair of the Committee on Probation