By: David Abbott - Updated: 8 months ago

The Miami High School Vandals baseball team won a statement game in Miami on Tuesday, April 30, beating the Trivium Prep Crimson Knights 12-2 to advance to the Division II state playoffs in Goodyear, where the team’s season ended with a 10-4 loss to the Camp Verde Cowboys.

Miami was 12th seed in the state tournament and Trivium Prep was 21st.

Prior to the game, the Vandals bade farewell to graduating seniors Matheu Escobedo and Langdon Koyayseva who turned out good performances in their final high school game on Miami soil.

In something of a theme for the game, Miami scored in fours: four in the second; four in the fourth and finally, four in the fifth for a mercy rule win.

Escobedo, who has been a solid starter for the Vandals, took to the hill for his final performance in front of the home crowd and, despite a shaky start, was dealing by the second inning.

The first inning began with a double to right field by leadoff hitter No. 3 RJ Liston. No. 13 Ryan Jacobs struck out, but a walk to No. 10 Max Hirth and a passed ball put runners on the corners for Knights cleanup hitter No. 8 Caedin Craft.

The fire was extinguished quickly though, when Craft popped up to Vandals shortstop No. 2 Jayden Goss and No. 22 Thomas Tanzer struck out.

In the bottom of the frame the Vandals threatened to break it open early. Knights pitcher No. 9 Luke Hirth had a hard time finding the zone, walking the first two Miami batters, Goss and Langdon Koyayseva. No. 37 Ryan Powell drove one deep to center for the first out, advancing the runners to second and third. A walk to Vandals No. 1 Gabe Escobedo threatened to turn into an explosion of runs, but a quick strikeout to No. 15 Austin Higginbotham followed by another flyout to center ended the threat.

The Knights went quietly in the top of the second frame despite a leadoff double by pitcher Ruelas, who was caught for the third out trying to score on a wild pitch to batter Liston.

The bottom of the second belonged to the Vandals though, and thanks to some Knights miscues the first four runs crossed the plate.

The inning began with a strikeout to catcher No. 12 Tyree Koyayseva, who made it to first base on an error by Knights’ catcher Tanzer. A bunt single by Matheu Escobedo followed by No. 4 Angle Perkins getting hit by a pitch loaded the bases for Goss, who promptly doubled up the leftfield line to drive in a pair of runs.

A walk to Powell sandwiched between two strikeouts set the stage for Higginbotham, who drove a double deep to center to score two for a 4-0 Miami lead. Higginbotham was thrown out trying to stretch the double into a triple to end the inning.

Both pitchers made quick work of their opponents in the third, but the fourth saw both teams put runs on the scoreboard.

The Knights started the inning with a single to right by Craft. Escobedo coaxed Tanzer into flying out to right-center field but gave up a walk to Hirth. Following a strikeout to No. 23 Jake Schleifer, Escobedo was pulled for reaching his 60-pitch pitch count for Powell, who promptly gave up a single to Rusick and a 4-1 Vandal lead. The inning ended on a popup to left field by number nine hitter Ruelas.

The floodgates opened once again for the Vandals in the bottom of the fourth, starting with a walk to Goss. After a groundout to the pitcher by Langdon Koyayseva and a strikeout to Powell that advanced the runner to third, it looked like the Knights were going to escape unscathed. But rightfielder Gabe Escobedo drove a single to center to make the score 5-1 Vandals.

Higginbotham then headed to the plate for one of the most bizarre scoring plays of the season. After striking out, the Knights catcher lost control of the third strike and pitcher Hirth threw wild to first base, followed by another error to score Escobedo and put Higginbotham on third for a 6-1 Vandal lead.

A walk to Riddle, followed by a triple to left by catcher Tyree Koyayseva capped the scoring at 8-1.

The Knights were not finished yet, though, as Liston singled to start the fifth, followed by a double by Jacobs for runners at second and third.

It looked like Powell was going to get out of it though, enticing No. 9 Luke Hirth to pop up to center followed by a strikeout to No. 7 Clint Lang. But an error on Matheu Escobedo, who moved to first after being pulled for Powell, cut the lead to 8-2 Miami.

A walk to Knights No. 20 Andrew Kerfoot loaded the bases with two out and it looked like Trivium was ready to crawl back into the game. Powell recovered quickly though, striking out Schleifer to end the threat.

The bottom of the fifth was all Vandals as Perkins led off with a single, followed by a triple to right by Goss to up the lead to 9-2. The rest of the scoring was the result of shoddy play by the Knights, as three errors and a single brought in the final three runs for a mercy rule end to the game. 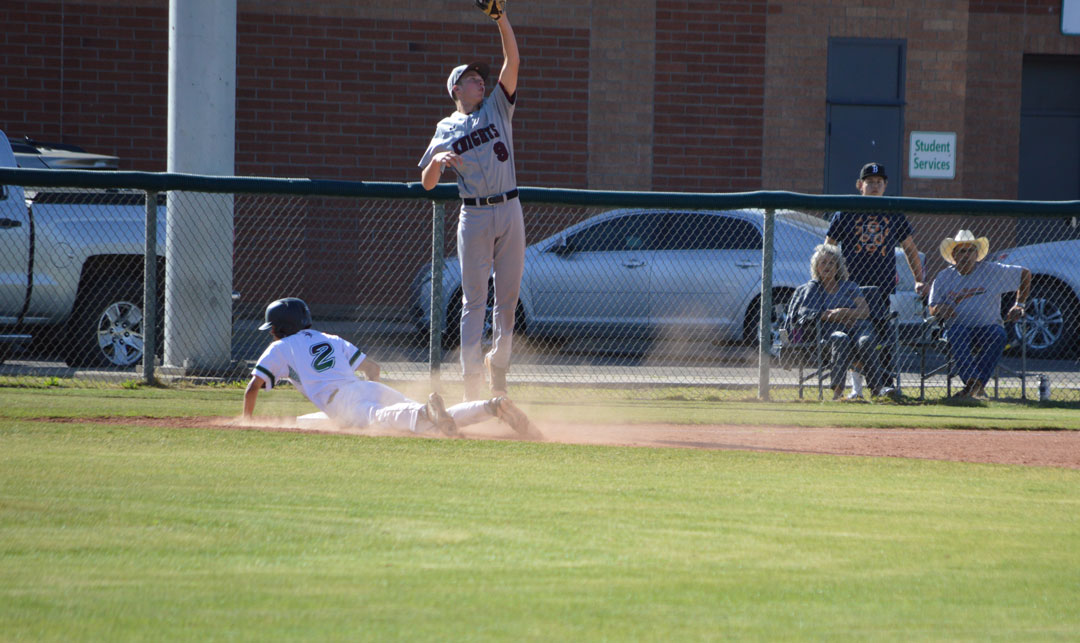 Things did not go so well in Goodyear on Friday, May 3 against the Cowboys, where the season ended with a 10-4 loss.

Matheu Escobedo, pitching his final game in Vandal green, was roughed up from the outset, giving up four runs in the first and two in the second.

By the time the fifth inning rolled around, Miami was down 7-0. Two runs in the top of the frame gave the Vandals a brief moment of hope, but in the bottom of the inning, the Cowboys hung a 3-spot.

Two runs in the top of the seventh was not enough as Miami made its exit from the tournament to end the season at 19-9.

According to Miami Coach Brandon Powell, the Vandals hit well, but were sunk by baserunning blunders that killed any chance at competing.

Powell is optimistic the team can grow from the experience though.

“If we grow and learn from this season, we should be pretty decent [in the] next couple of seasons,” Powell said. “Five years ago, when Miami hadn’t won a region championship in 20-plus years or had more than nine or 10 wins, this would have been an exceptional year. But when you win five region championships in a row and go six years in a row with 18-plus wins you start judging your seasons on a more elevated scale. So all and all I would have to say this was a pretty successful season.”

The future is bright for the Lady Tigers