By: David Abbott - Updated: 1 year ago

On Friday, April 19 Gila County District 2 Supervisor Tim Humphrey gathered local fire officials together in Globe to discuss what is expected be a tough fire season, given the amount of moisture from the winter storms that has added plenty of fuel to potential fires.

A good portion of the 2-hour meeting was devoted to a presentation by the National Forest Service outlining Strategic Fire Management Zones, as well as discussion about the amount of fuel for the 2019 fire season after historic winter precipitation.

In attendance at the meeting were several representatives from the Arizona Department of Transportation (ADOT) to the Tonto Basin Fire District to local Globe fire officials.

“It is important for us to be here,” Humphrey said by way of introduction. “No matter how much we try to think outside of the box, we need to think ahead.”

The brunt of the discussion was led by U.S. Forest Service Zone Fire Management Officer for Tonto Basin and Globe, Brad Johnson, who explained strategies for fighting fire in Tonto National Forest that include the potential wildland fire operations delineations (PODs) map, which breaks the region into “strategic fire management zones” to deal with fires in any given area.

The Forest Service created the zones using a “risk-based rather than distance-based” approach to coincide with differing fire management objectives, such as community protection, or managing wildfires “where and when they can result in resource benefits.”

Maintaining firefighter safety is also a primary objective to the PODs.

The wildfire maintenance zone poses a low threat to communities in an average fire season, so such fires are often left to burn for the benefit of wildlands.

Zones in the Sonoran Desert are high-priority, in order to protect a fragile ecosystem, and human-caused fires receive immediate attention as well.

The strategies employed are based on a southern Sierra Nevada wildfire risk assessment “spatially modeled [to] assess contemporary wildfire risk across the forest plan area,” according to a FAQ sheet provided by the Forest Service. The PODs are broken into five categories: Maintain; restore; protect; exclude and high complexity.

The areas are bounded by “real fire management features,” such as roads, rivers, major ridges or barren areas that could help contain wildfires when used with other fire management resources.

The goal of the strategic fire management zones is to support decision makers by providing areas for which wildfire risk and potential benefits have been assessed before a wildfire starts.

“It helps coordinate strategic responses whenever we’ve identified on the map to look and see how complex it’s going to be,” Johnson said in a subsequent interview. “It can be really complicated with access issues, structures and the Sonoran Desert that we can’t let burn. We also have to think of the safety of the firefighters.”

In addition to the PODs maps for fire assessment, Arizona Interagency Wildfire Prevention, a collaboration between the National Park Service, Fish and Wildlife Service, Bureau of Indian Affairs, Arizona State Forestry, U.S. Forest Service and Bureau of Land Management, provides news and information about wildfire conditions and prevention at wildlandfire.az.gov.

One of the key prevention efforts is the One Less Spark, One Less Wildfire campaign, designed to raise awareness of the fire danger posed by vehicles and careless behavior.

“People need to be aware that overheated brakes, tow-chains, trailers and mechanical issues can add to fire danger,” Johnson said.” “Make sure everything is tight and secure, because we get a lot of roadside fires.”

The Forest Department also warns against parking a vehicle in places where grass is tall enough to touch it. This year, the agency took the unprecedented step to close off Bermuda Flat Shoreline Area to vehicles.

“It’s a double-edged sword: we need the moisture but now there is an abundance of fuel,” Johnson said. “We’re averaging a fire or two a day, particularly in Mesa and Cave Creek regions because of shooters and from other human activity, from carelessly tossed cigarettes to trailer chains creating sparks.”

Johnson said it is because the water levels have risen to the point where vehicles were concentrated on grassy areas that sprung up due to the wet winter.

“The big thing is to understand what is combustible around you and to be careful with fire,” he said. “People also need to create defensible spaces around their homes and get rid of combustible debris.”

The fire season begins when vegetation starts to dry up. In preparation for the season, Johnson brings on 25-30 extra firefighters.

“We bring on the seasonals in April for training and to get ready,” he said. “We want to get everybody on board and ready to go.”

That group includes the Globe Hot Shots, an elite national resource that can be deployed anywhere in the Western U.S. to help fight fires.

“We send crews where they need to go,” Johnson said. “When there is monsoon moisture here, we send them to other regions.”

He added that in preparation for the season, he has nearly constant meetings with stakeholders, from ranchers to various government agencies, in order to keep everyone abreast of the situation.

This year’s “abundant grass crop” — and residual vegetation from the blast of wildfowers — raised concern throughout the agencies on hand at the meeting.

“All the wildfowers are beautiful, but they’ll be very flammable,” Humphrey said. “The Salt River going into Roosevelt [has created] a lot of underbrush and with the campfires there … I just cringe.”

In addition to the interagency cooperation, ADOT was on hand to reiterate its dedication to helping firefighting efforts with such things as water tanks, earth-moving equipment, water trucks and even road closures.

“We need to work together as a team,” Humphrey concluded. “Together, everybody achieves more.”

Tonto National Forest is comprised of three zones — Payson, Central and South — for a total of 2.9 million acres. The Globe and Tonto Basin districts cover 1.1 million acres of national forest.

Photos released by ADOT to promote the “One Less Spark” informational program shows the dangers of fire caused by vehicles. 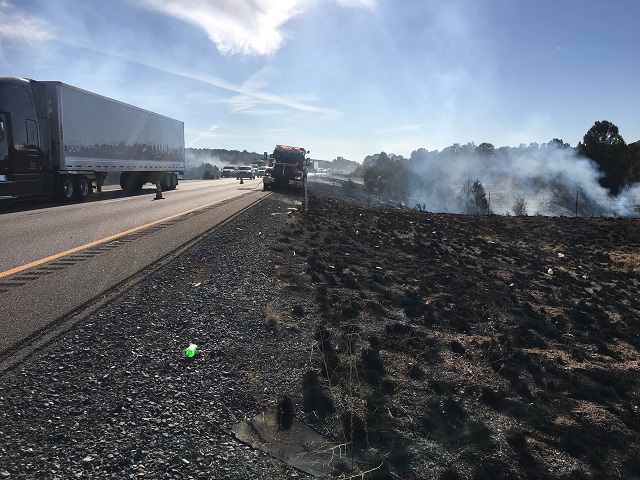 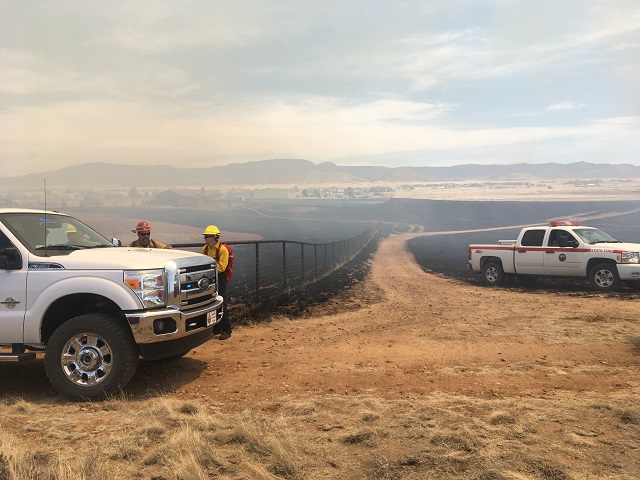 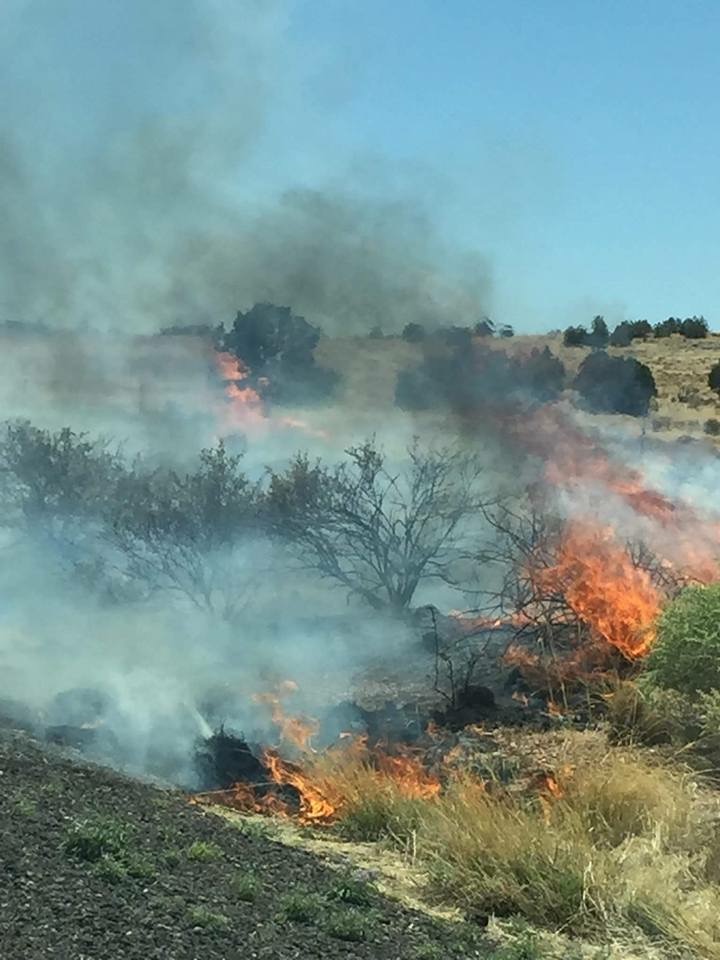 Cane Loop campsite units 161-187 within Cholla Campground on the Tonto Basin Ranger District remained closed through Wednesday, May 8 following a vehicle and trailer fire in that area on Saturday, May 4.

Fire specialists from the Tonto Basin Ranger District responded to reports of a pickup truck on fire shortly after 4:50 p.m.

A generator in the back of the pickup caught fire and spread, ultimately consuming one acre of forest vegetation along with the pickup truck and two camping trailers.

Together with visiting specialists from the San Bernardino and Coconino National Forests, forest personnel managed the wildland portion of the fire while representatives from the Tonto Basin Fire Department handled the burning truck and trailers.

The Gila County Sheriff Department also was on scene and aided in the evacuation of about 25 campers within units 161-187.

“While most campers within that section were accommodating and attempting to depart quickly, we did have a few campers who did not feel the scope of the fire warranted them leaving,” Johnson said. “We closed the section because firefighter and public safety are the Forest Service’s top priority.

“Fortunately, with the help of our cooperators, no one was injured during this incident,” Johnson added. 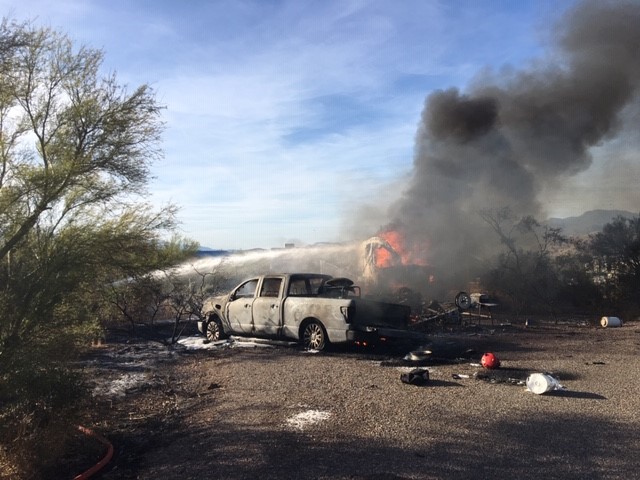 Smoke billows from a fire set by a truck and trailer at Cholla Campground in the Tonto National Forest.