By: David Sowders - Updated: 5 days ago

Bullion Plaza Cultural Center & Museum is greeting this spring with a colorful addition to one of its exhibits.

The desert ecosystem is the theme of local artist Patty Sjolin’s new mural for the museum’s McKusick Tile Exhibit - a work of art that will complement the collection of birds and mammals depicted in ceramic tile by Globe artists Robert and Charmion McKusick.

Stretching over three walls of the exhibit room, the mural will portray local animals and plants in their natural settings, both above and below ground, including a riparian area. It will also show area landmarks like the Pinal Mountains and Salt River.

The project, which Sjolin called a team effort, was inspired and largely funded by Victoria Carella and her partner Charles Beck, of Globe, whose home Sjolin had decorated with a dinosaur mural in 2020. The couple brought her the idea for this new work and contributed a major share of its funding.

The artist said she is putting in four to five hours a day on the work, and expects to finish it in around a month. She added that the mural will be educational and interactive, and there are plans to create an accompanying coloring book.

The ceramic tiles in Bullion Plaza’s exhibit, produced by the McKusicks over decades of work, portray Native American themes as well as local wildlife. Robert McKusick, who taught ceramics at Gila Community College for many years, also helped design the exhibit. 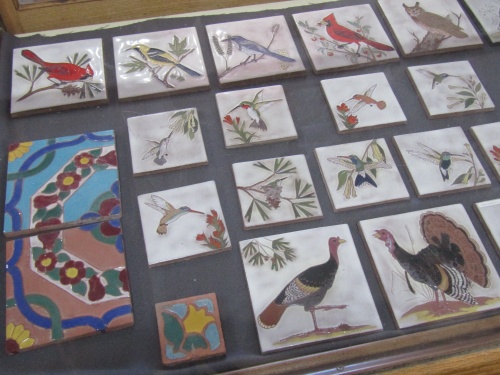