By: Carol Broeder - Updated: 1 year ago

The public has until May 11 to comment on the Miami Manufactured Gas Plant (MGP) Remediation Project, set to begin in July.

Arizona Public Service (APS) will clear contaminated dirt from a small parcel in Miami as part of a voluntary program to clean up eight MGP sites statewide that at one time belonged to corporate predecessors of the energy giant.

According to APS, MGPs operated from the 1800s to the 1940s and, at one point, there were more than 1,500 MGP sites operating throughout the U.S.

There were 13 such sites in Arizona and predecessors to APS operated eight of them.

Over the course of time, APS sold the natural gas portion of its business, but retained responsibility for environmental impacts on the sites.

The Miami site remedial action plan outlines the methods APS will use to remove MGP byproducts.

It is available for public review at the Miami Memorial Public Library, 282 S. Adonis Ave., Miami or online at azdeq.gov/notices.

APS is required to make the plan available for public view and comment before Arizona Department of Environmental Quality (ADEQ) will approve it.

Comments must be received by Saturday, May 11 and must reference “APS Miami VRP.”

According to the storyboards on display, the remediation work will take place from 6 a.m. to 6 p.m., on weekdays as well as some weekends, beginning in July.

Excavation and restoration is scheduled to be completed by December.

In the early part of the 20th century, before natural gas became available, fuel for home heating and light was produced by reducing coal or oil to a gaseous form.

MGP byproducts include lampblack, residual oils and tars comprised of several compounds, including polyaromatic hydrocarbons and volatile organic compounds, according to information from the APS display.

Health impacts require “long periods of exposure and are typically inert and do not biodegrade or migrate to the environment.”

“There is good news and bad news,” APS Principal Environmental Scientist Judy Heywood said last year. “It’s not water soluble, so it doesn’t leach into the water system. But it stays because it is not biodegradable.”

Initial assessments determined that there is no water down to at least 50 feet and the cleanup will be to the highest level possible.

“There are different cleanup levels: industrial and residential,” Heywood said. “We can use industrial as long as there is no water, but we’re going to use residential, which has a very high groundwater protection level.”

Operated between 1923 and 1942, the Miami MGP was located near Latham Boulevard and Highway 60, producing gas to light and heat homes.

It is currently used as the Town of Miami Public Works maintenance yard — known as The Barn — behind CopperState Sanitation.

In 1987, APS began environmental assessments for all of its former MGP sites, with Miami MGP soil sampling and analysis conducted in 1996 and 1997.

The additional sampling APS did last year was used to develop the proposed remediation plan.

The Miami MGP remediation plan includes excavating and removing affected soil, using construction equipment, such as backhoes and excavators. A large diameter augur may also be used to remove deeper impacts. In some areas, soil will be excavated to depths up to 15 feet.

The impacted soil will be transported to an “appropriately permitted landfill,” with the soil moved to and from the site along a designated route.

APS will collect confirmation samples to ensure that all impacted soil is removed. The excavated soil will then be replaced with clean fill dirt.

To minimize neighborhood impact during the project, APS plans to use a variety of tools to control dust and odor, including fence line misting systems and spray foam odor suppressant.

Air quality at the site will be continually monitored, with air samples collected and analyzed.

APS is telling area residents to expect earthmoving equipment with backup alarms beeping; trucks hauling excavated soil out as well as clean soil into the site; drilling rigs to install the shoring and smells like mothballs and/or old “oil fuel.”

APS will replace and/or restore any structures on site affected by the remediation project.

The property will be restored and returned to the Town of Miami.

While ADEQ provides oversight, APS is solely responsible for all ADEQ VRP oversight costs. All of the fiscal responsibility for the cleanup lies with APS and ratepayers will not pay for it with rate increases. ADEQ will bill APS directly for all associated costs, which will come from shareholder profits.

On April 8, 2018, the Town of Miami and APS entered into an agreement for the site cleanup. The site is the only MGP that still has its original building.

APS Construction Supervisor Bryan Goslin, in Globe, said, “What we’re doing here is no big deal. What’s really great is the history of the site.”

The two-acre site, to which Goslin refers, was built in 1923 and operated by the Miami Municipal Gas Company until 1930, when it was sold to the Arizona Edison Company.

In 1952, Arizona Edison merged with the Central Arizona Light and Power Company to form APS.

Twenty years later, in 1972, the Town of Miami took title to the property.

In the 1990s, APS began a concerted effort to clean up remnants of a past age.

“I’ve been working on it since the 1990s when we did the initial investigation,” Heywood said last year. “It takes a lot of prep work.”

Heywood began her work in 1995 and in ’97, began to study and prioritize the sites for cleanup. The Miami site was far down the list because of its relatively tiny size and the small amount of material to be removed.

David Abbott contributed to this report. 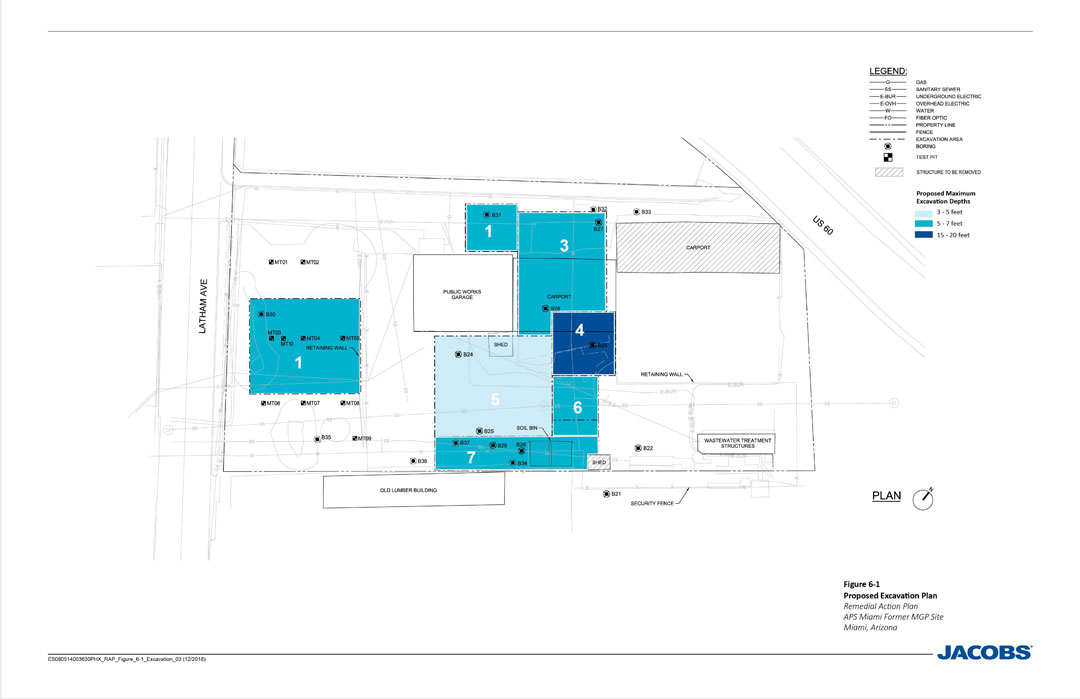 A site map of the area APS will soon mitigate as part of a decades-old project to clean up gas manufacturing sites it owns from previous incarnations of the company. Image provided.