Historic Globe structure in for improvements

By: David Sowders - Updated: 3 weeks ago

The Globe Historic Preservation Advisory Commission, having received city council approval, is moving ahead on a project to beautify Broad Street’s “southern gateway.”

The project goal is to refurbish Globe’s historic concrete teepee, a piece of Route 66-type architecture on Broad Street which dates to the 1940s, and beautify its surroundings.

“People still have pictures taken in front of the teepee,” said Commission Chair Rachel Hansen. “We’d  like to see more hardscaping and landscaping around it, have the teepee repainted and the parking lot paved. We’re also proposing two signs behind it, including a way finder and a ‘Welcome to Globe’ sign. It would be a bookend to mirror the north entrance of Broad Street.”

The teepee once served as an entrance to various bars that stood at 315 S. Broad St.; first the Pic-A-Rib Cocktail Lounge, then the Red Roan Saloon and El Lugar. The building they occupied no longer stands.

In their April meeting, the commission discussed the next steps including how to fund the project (members agreed this was the lead priority), whether bolder colors and/or larger images should be used in repainting, and possibly including signage on the teepee’s history. Commission members decided to follow up with the city on funding possibilities and send repainting/signage recommendations to the Globe Arts Advisory Commission.

“My goal in being on the commission has just been to make Globe a little bit better than before,” Hansen told the Silver Belt. “I feel our historic downtown is the heart of the community; it has so much life. Good design really lifts people and brings them enjoyment, whether they realize it or not.” 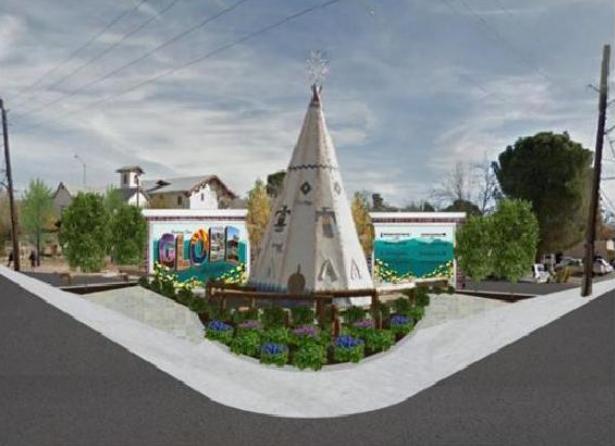 A rendering of the commission’s “Broad Street Southern Gateway Project” shows how those improvements might look.